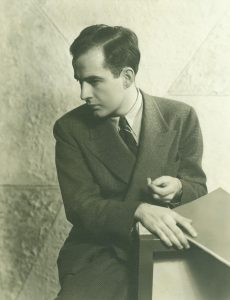 Samuel Barber (1910-1981) was an American composer of orchestral, opera, choral, and piano music. A native of West Chester, Pennsylvania, he attended the Curtis Institute of Music from 1924 to 1934, studying composition with Rosario Scalero and voice with Emilio de Gorgoza

The Curtis Archives and Special Collections maintains an extensive and unique collection of materials related to and created by Samuel Barber.  Over the years, friends and colleagues have donated scores, correspondence, photographs, and recordings.

An important and respected figure at Curtis and the greater musical community, Barber touched the lives of many other fine musicians also featured in the archives including Rose Bampton and Orlando Cole.  Beloved by Curtis’s founder, Mary Louise Curtis, Barber and his partner in work and life, Gian Carlo Menotti traded letters for many years.  Conversations were often full of wit and humor and reflected Barber’s professional and personal life.

Digitization of Curtis’s collection of Barber archival material is in progress.  All digitized materials can be browsed here: 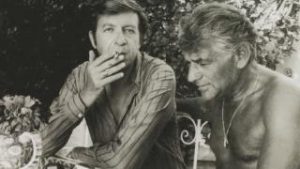 In preparation for writing his 1968 book, The Private World of Leonard Bernstein, John Gruen recorded a series of interviews with Bernstein, his family, and select friends and colleagues. The audiotapes capture candid moments of the interviewees as they delve into their memories of Bernstein as a child, student, husband, father, and musical prodigy.

Gruen accompanied the family, complete with servants, nannies, and gardeners, on a summer-long vacation in Ansedonia, Italy, observing their daily routines. All are asked to comment on the experience of living under the influence of Bernstein’s fame and genius. Some, like Helen Coates, Bernstein’s first piano teacher, who later became his secretary, devoted their whole lives to supporting him and his career. His daughter Jamie admitted, in typical adolescent fashion, that she sometimes found his music to be boring and that he lectured the children too much.

It was nearly two months into the trip before Bernstein himself sat for an interview. Understandably, he preferred to relax either in solitude or with his family away from the frenetic pace of his New York life. When Gruen finally got him talking, Bernstein often reflected on his youth, in particular his close relationship with his siblings Shirley and “Burtie” (Burton).

His conversations with Gruen about his student years at the Curtis Institute of Music are like those he expressed in his self-portrait Findings and his speech given during Curtis’s 50th-anniversarycelebration: a combination of youthful drama, conflict, discovery, and eventual appreciation. His time at Curtis had special resonance because it was here, under Fritz Reiner’s tutelage, that he first conducted an orchestra.  He describes the experience to Gruen:

“It was Brahms’ Third, first movement.  I went mad!  I was engulfed in a sea of sound. I was not prepared for this…no one can know what it is like to stand in an orchestra. I’m sure I was just horrible.”

Sometimes pretentious, Gruen and a handful of his interviewees (particularly those who worked with Bernstein in theater and film productions) seem to be nearly caricatures, a mix of Manhattan and Old Hollywood style.  Their words are no less true for it, and in fact, hearing them spoken aloud puts everything into context: who Bernstein is, who others want him to be, and what they want to be to him. True to the interviews, the finished book portrays Bernstein as a playful man with his cautious wife, well-loved and precocious children, conflicted colleagues and admiring friends.

In 2012, Curtis purchased the recordings and other related materials collected by Gruen. His collection of Leonard Bernstein materials is available to visitors, by appointment, via the Curtis Archives.

Listen to the Gruen Interviews

Copyright © 2016 Curtis Institute of Music Library. All rights reserved.
©2020 Preservica
We use cookies so that we can provide you with the best user experience possible. Click Accept to confirm that you are happy with us to use cookies.